Space is hard to come by in London, and living in a shared flat with two other human flatmates and seven bicycle flatmates (six of them belonging to us) doesn't make it any easier! We've been talking for a while about building some sort of bike rack, but we recently saw a post by Travelling Two that gave us the confidence to do it!

The bike stand that they built is an Ikea Hack -- it takes parts from Ikea that are meant for another piece of furniture and repurposes them into a bike rack. We wrote down the parts that were needed: the Broder post, height extension post and foot, and two brackets, as well as four Stolmen hooks, and headed off to Ikea. We then found out that even though it was indicated as "in stock", the height extension post and foot was nowhere to be found on the shelves. We checked with some staff members and learned that the part is actually being discontinued! (So hurry up and make your own stand soon!) But also that there was a large quantity at another London Ikea. So, after two trips to Ikea in three days, we finally had all the parts we needed and set about building it! 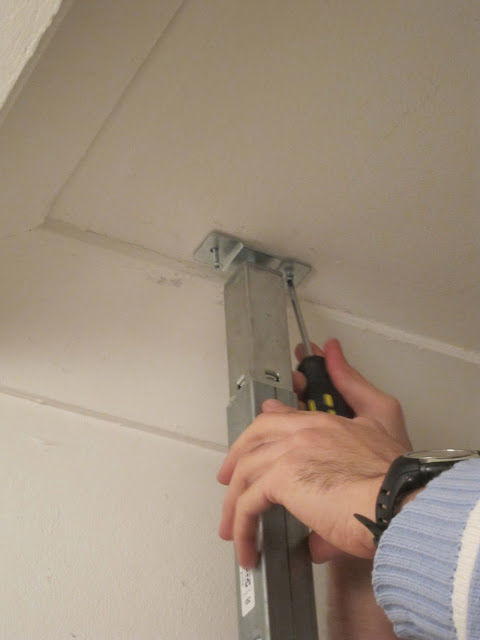 It was relatively straightforward--just two screws in the ceiling, and the post supports itself via a tension spring. We glued pieces of inner tubes on the inside of the hooks to prevent the bikes from getting scratched, loaded the bikes up, and have been living much more spaciously ever since!

The only problem was that my road bike's crossbar is not round all the way along it and therefore does not fit into the hook. No problem, we just put the mountain bike there instead, and turned the handlebars so that they wouldn't jut out into the hallway too much. We are thinking about building a second one, and if so we'll need to either bend the hook, or find another solution so that my road bike can fit in the brackets (suggestions welcome!). But for now, we are very happy with our bike storage solution!